“It is absolutely impossible to explain in any classical way and has in it the heart of quantum mechanics. In reality, it contains the only mystery.” – Richard Feynman

The best way to develop an understanding of the way that quantum mechanics works, and the mysteries associated with it, is to examine the double-slit experiment.

In essence, quantum mechanics is the study of all things small and how they behave, the quantum double slit experiment was performed to analyse how fundamental particles (electrons) behave when they are fired at two slits in a sheet of metal.

Here is a schematic of the experiment: 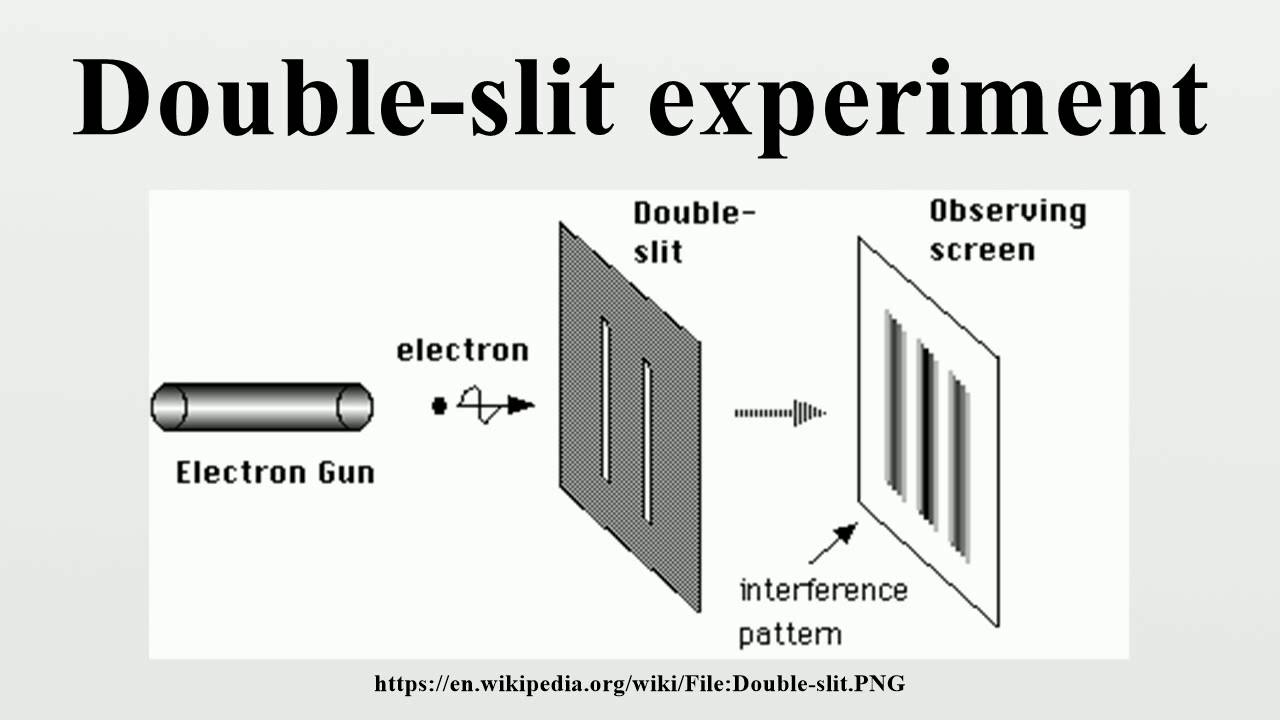 An electron is fired towards a thin sheet of metal with two vertical slits cut into it. Behind the sheet is a screen which records the positions where electrons strike it. If an electron strikes a particular point on the screen, that part of the screen lights up. If you fire a large number of electrons toward the screen, then the resulting pattern of bright dots is what’s called an interference pattern.

The question to answer now is how do different kinds of object behave when we conduct this experiment on them? We have four different objects to consider: Marbles (Big particles), Electrons (Tiny particles), Water Waves (Big Waves), Light (Tiny Waves)

What would happen if we used a BB-gun for example to fire spherical pellets through this experimental set up? Well, we’d get two bands of “hits” on the screen roughly in line with each of the slits:

Now imagine you’re doing this experiment, but with the apparatus half-submerged in a water tank. The gun is replaced by a wave-maker that sends out water waves from a point. These waves then approach the screen through the slits and the screen measures the intensity of the waves that reach it at each position. A brighter spot on the screen implies a greater intensity of waves has hit that position.

The interference pattern you get from this looks different to that for particles:

It was widely believed before the double-slit experiment was performed that light was a kind of wave propagating through the luminiferous aether, in the same way that water waves propagated through water.

It came as no surprise then that light produced the same kind of interference pattern as water waves did.

Based on the considerations above, it was natural then to think that all things belonged to one of two categories: waves and particles, whose characteristic interference patterns were:

Based on the above, and that we naturally believe electrons to be tiny particles, we would assume that performing this experiment on electrons would produce a particle interference pattern.

But this is where the mystery begins, electrons produce a wave pattern, not a particle pattern!

Well this is not what was expected, but perhaps we can make some sense out of this fact?

It turns out that this is extremely difficult to accomplish, and is one of the central reasons why quantum mechanics is so difficult to comprehend. For example, we expect that electrons have definite positions at any particular time, waves however are spread out over space, you can’t assign a meaningful “position” to a wave.

See the next article for a discussion of how we try to interpret the results of this experiment.

3 thoughts on “The Only Mystery of Quantum Mechanics”