The universe in colour! …or not. The object I’m focusing on today is almost completely black, it gives off virtually no radiation of any sort: 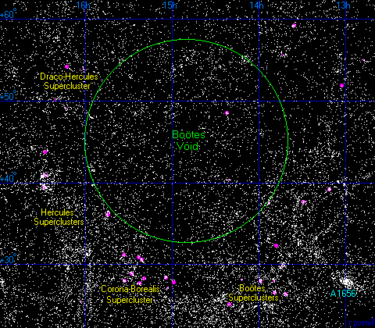 The Boötes Void is a massive region 330 million light years across that contains virtually no galaxies. It’s hard to see from the image itself just how large and empty the void is, the dots of light that appear in the void region are actually stars and galaxies that lie between us and the void. The green circle which represents where the void actually is however, should convey just how unimaginably large this void is.

The great thing about the Boötes Void is that we have absolutely no idea why it is empty. Is it a coincidence? Or is it because there’s something there that we just can’t see?

Despite how it may appear, we have actually discovered the existence of around 60 galaxies within the Boötes Void. This may seem like a lot, but making a rough approximation based on the rest of what we see in the universe, for its size the Boötes Void should really contain 2000 galaxies.

There are several theories that seek to explain the void’s existence. It’s suspected that the void was formed from a number of smaller voids that coalesced, like small bubbles in a drink can combine to form larger bubbles.

There are other possibilities too though. A more radical theory suggests that this may be a sign of a super-advanced civilisation that has dimmed all the stars in this region by building Dyson Spheres around them. The sheer size of this void however makes it seem rather unlikely that a civilisation has covered such a large area.

Whatever the case may be, the Boötes Void is a stunning image and a mystery to ponder.

3 thoughts on “The Universe in Colour: Boötes Void”