Despite the overwhelming evidence in favour of the Big Bang model there has been a rise in prominence of “creation scientists” who claim that science tells us the universe is not billions of years old and that there was no Big Bang. In fact AP polls suggest that a majority of Americans (51%) are doubtful that the Big Bang model is correct. It’s an extremely worrying trend for a country with such a distinguished recent scientific history.

While it’s always healthy to be sceptical about things and to re-examine the evidence supporting your science, it seems a worrying number of people are taking this far too far. The bottom line is that there is a wealth of evidence that supports the Big Bang theory which no other known theory can explain. If we had two competing theories which both predicted the existence of the Cosmic Microwave Background and the relative abundances of elements in the universe then there would be room for debate.

Now that’s been said we can move on to discussing one of the major pieces of evidence in favour of the Big Bang which would be difficult for any other theory to explain.

Where does it come from?

If you want to have a successful theory of the structure and history of the universe, you’re going to have to explain where the CMB comes from. The Big Bang theory is the most natural explanation for its existence.

The Big Bang theory simply claims that the observable universe used to be much smaller; which means it used to be much denser and hotter. If the universe has always been expanding, then at some point in its past the temperature of the universe would have been huge – enough to rip atoms apart into ionised plasma. The ionised plasma is opaque to light, it can’t get through. The early universe would have been comparable to walking through a valley filled with fog. In thick fog light cannot propagate very far and you can’t see anything through it.

At some point in the universe’s past however, the fog lifted. This is called the “era of recombination” and occurred around 300,000 years after the Big Bang. At this point the universe was cool enough for atoms to form and allow light to propagate freely through the universe. The Big Bang model predicts that we should be able to detect this “first light”, and this “first light” corresponds exactly to the radiation that we detect coming from every direction.

When it was first emitted, this first light would’ve been incredibly hot and energetic. This corresponds to short wavelength light. As the universe expands however, the wavelength of the light gets stretched out, so this “first light” that we are detecting now has undergone billions of years of expansion and now has a very long wavelength, which corresponds to cool (-270 degrees) microwaves. This is exactly what we see in the CMB.

Can this be explained another way?

It is often claimed by online science articles that the Big Bang theory is the only theory that predicts the CMB. This is true and also not true. 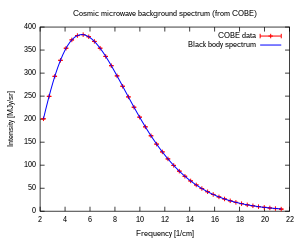 So it is correct that no theory other than the Big Bang predicts the correct temperature of the CMB and its spectrum, but not true that no other theory can produce a “background temperature”.

While there is plenty of other evidence for the Big Bang theory, the general consensus is that the CMB is the most decisive.